[New publication] Comparative Literary Studies, 55 (4): Ecocriticism in East Asia – Toward a Literary (Re) Construction of Nature and Environment

Comparative Literary Studies, 55 (4): Ecocriticism in East Asia – Toward a Literary (Re) Construction of Nature and Environment

Introduction: Ecocriticism and Ecocivilization in the Confucian Cultural Environment by Ning Wang

Abstract: In this introductory essay on the special issue “Ecocriticism in East Asia,” the author first offers a critical introduction and commentary on various essays included in this issue. And then, the author wants to argue that the issue of ecological and environmental problems is very relevant to our life in the present era, especially in China as well as in other East Asian countries or regions where economy has been developing by leaps and bounds during the past decades. On the other hand, environmental problems have also occurred in different countries or regions in East Asia. As literary scholars, what we should do is to find some ecological wisdom from ancient Asian philosophy, especially the Confucian and Daoist doctrines which are full of ecological resources. The articles in this issue do not merely offer their authors’ critiques of the destruction of nature and environment in this area, but rather, they also try to provide some possible solutions although their proposals would not necessarily be adopted by the decision maker.

Abstract: This commentary begins with a review of the status and development of the burgeoning field of environmental humanities, of which ecocriticism (literature and environment studies) is an important subfield. The authors call for more attention to environmental humanities on a global scale, beyond the confines of Western academia. The second part of the commentary discusses the individual essays collected in this special issue of Comparative Literature Studies which together not only reveal ecological consciousness and eco-writing as having been a vibrant part of East Asian culture throughout the ages but also promote new understandings of world literature.

Delving Into a World of Non-Human Experience: Unnatural Narrative and Ecological Critique of Chen Yingsong’s The Last Dance of a Leopard by Biwu Shang

Abstract: As a rejoinder to Erin James, this article tries to bridge the divide between narrative theory and ecocriticism. From a dual perspective of unnatural narratology and ecocriticism, it approaches contemporary Chinese animal narrative fiction and Chen Yingsong’s The Last Dance of a Leopard in particular. Through its unnatural narrative form featuring such a dead nonhuman narrator as leopard, the novel transports readers to a world of solitude to convey a sense of what it is like to be an extinctive animal. Revisiting and underscoring the tension of the human and nonhuman divide, the novel urges readers to adopt an ecological attitude confronting anthropocentricism and to reconsider human–animal relations.

Abstract: As a writer rooted in China’s historical, social, and cultural transformation, Jia Pingwa has expressed in his works his anxieties over environmental deterioration and the effects of that deterioration on people. With the thriving of ecocriticism in China, his Remembering Wolves has received a new wave of significant attention due to its ecological concerns. In tracing Gao Ziming’s journey to photograph the fifteen remaining wolves in Shangzhou, Jia weaves different strands of ecological thoughts into the story. Through a close reading of this novel, this essay first attempts to reveal the way Jia expresses his anxieties over the current racial degeneration, it then proceeds to analyze his mobilization of traditional Chinese ecological thoughts in his representation of nature. It ends by highlighting the intrinsic connection between the environmental crisis and the current social problems in China.

Toward a Holistic Ecofeminism: A Chinese Perspective by Qingqi Wei

Abstract: While ancient Chinese ecological wisdom particularly found in Daoism has become increasingly known to the world academia, its holistic feature connected with an ecofeminist dimension is yet to be investigated. Besides, rupture remains to be removed between great masters’ theories and ordinary people’s lives. There are reassuring hopes that as a continuum of this ongoing process, contemporary Chinese scholarship in this regard inherits ancient Chinese philosophy and facilitates many developments, especially making possible a holistic Chinese ecofeminism, with the reinterpretation of yin and yang as a paradigmatic endeavor.

Nature and Ethnic Women: An Ecofeminist Reading of Chi Zijian’s The Last Quarter of the Moon and Linda Hogan’s Solar Storms by Lanlan Du

Abstract: Although they do not have any factual connections, both contemporary Chinese writer Chi Zijian and Chickasaw writer Linda Hogan have deep concerns about the intertwined environmental and gender issues. By employing an ecofeminist approach, this essay aims to make a comparative analysis of The Last Quarter of the Moon and Solar Storms to analyze ethnic women’s affinity with nature and the twin exploitation of nature and women revealed in them. It argues that both the two novels emphasize a general acceptance of the interconnectedness of human and nonhuman world, with The Last Quarter of the Moon focusing more on the unity between nature and humanity, and the lamentation of the demise of the Evenki culture in the process of modernization whereas Solar Storms has a clearer awareness of resistance to the double oppression of the land and Native American women.

Abstract: This article is particularly concerned with the interrelation between experience and expression, womanhood and creativity. It examines the extent to which Sylvia Plath’s and Zhai Yongming’s writings are informed by political, social, economic, and environmental changes in a cross-cultural context. In so doing, it reveals a somewhat hidden ecofeminist awareness shared by the two poets in a cross-cultural context, which facilitates authorial reflections on the intricate relationship between womanhood, nature, and urbanization. Gendered images and symbols, as well as physical and spiritual scars experienced by womanhood, are emphatically addressed to showcase Plath and Zhai’s ecologically informed confessional poetics.

Abstract: Dao De Jing contains the essence of Chinese philosophy and to study Dao De Jing from an ecological perspective in this article is to trace the ecological elements in this ancient Chinese philosophical work and its manifestation in literature east and west, past and present. This article examines how the principle of the harmony (unity) between nature and human beings is embedded in both this canonical book and the other Confucian classics—its pre- and after-life in the Four Books and Five Classics, especially the Book of Changes. Through analyzing the three sorts of harmony: between human beings and nature, between yin and yang, and between various obstacles, the article argues that the ecological concept in the book not only has had a deep impact on ancient Chinese people’s life, but also is of contemporary relevance. It offers a sustainable proposal for the future development of the postmodern community, no matter it is with human fellow mates or with the natural environment. And that proposal is being water metaphorically speaking.

Is Man Superior to Animals? A Comparative Reading of Animals in Biblical Narratives and Chinese Classic Texts by Luofu Ye

Abstract: This article aims to discuss the interrelations between human and animals from the perspective of comparative reading of biblical narratives and Chinese classic texts. By reviewing animal symbolism in these two traditions, this article argues that the Chinese symbolic animals are closer to nature, and the biblical symbolic animals are depicted with political and theological reflection. The article reads the garden of Eden narrative with a cross-textual approach, the understanding of she in traditional Chinese culture shed light on the serpent, an alternative interpretation of the serpent’s theological importance is unveiled.

Animal Narrative and the Dis-eventalization of Politics: An Ecological–Cultural Approach to Mo Yan’s Life and Death are Wearing me Out by Zhengzhou He

Abstract: Slavoj Žižek argues that every event is likely to be dis-eventalized, to be retroactively undone. The true event, according to Badiou’s account, is “a contingency which converts into necessity,” generating a new principle or paradigm that becomes universally acknowledged. Such true events are rare, but the undoing of past events has always played a predominant role in the course of history. In the novel Life and Death Are Wearing Me Out written by Mo Yan, China’s Nobel Prize Laureate, political events such as the Agricultural Cooperative Movement, the People’s Commune Movement, and the Cultural Revolution among others are retroactively undone mainly through the means of animal narrative. In the process, animal narratives also reveal ecological thinking about the harmony among humans, animals, and nature. More importantly, the dis-eventalization of politics and the eventalization of ecological consciousness coexist and complement each other. This dual narrative structure is not only characteristic of the animal narrative of the novel, but also endows it with plot tension and a depth in thought.

Abstract: In Northeast China, China’s Korean ethnic group has made the ecological combination of sustainable development with nature by planting rice and apple-pear. This process has been described richly in the literature of Korean ethnic group and the stories about Korean ethnic group. Though the stories used to be considered as manifestation of Korean ethnic immigrant history and the history of their fighting against Japanese in the Anti-Japanese War, they can be designed as the discourse of the process of ecological positive and negative feedback, self-organization, stability domains, and the adaptation in human social systems and ecosystems from ecocritical perspective.

Speculating Extinction: Eco-Accidents, Solastalgia, and Object Lessons in Wu Ming-Yi’s The Man with the Compound Eyes by Robin Chen-Hsing Tsai

Abstract: Taiwanese nature writer Wu Ming-Yi’s The Man with the Compound Eyes explores important environmental issues such as eco-accidents, the garbage vortex, speculative extinction, and memory in the age of the Anthropocene. While examining the Anthropocene hypothesis and the eco-accidents it triggers, I analyze the ways in which Wu’s nonanthropocentric, object-oriented neuro-poetics can help theorize a new materialism of the brain based on Australian philosopher Glenn Albrecht’s “solastalgia,” a feeling of “unhomeliness” while still living “at home” due to environmental distress.

Semiotics of Disaster: Writing in the Aftermath of Japan’s 3/11 by Tong King Lee

Abstract: Hideo Furukawa’s Horses, Horses, in the End the Light Remains Pure is among the first literary responses to Fukushima’s 3/11 triple disaster—Japan’s worst catastrophe in decades. This article reflects on the formal characteristics of disaster writing by analyzing Furukawa’s work with respect to its genre, temporal–spatial structure, and rhetorical style. It argues that the work’s generic ambiguity, nonlinear narrative structure, and fractured, minimalist prose are paradoxically resonant with the gravity of the crisis that gave rise to the writing. The article also highlights the metatextuality of Horses, which is as much about writing disaster as it is about writing about writing disaster, and argues that this metatextuality affords Horses a self-reflexiveness that distinguishes it as a unique piece of ecocritical literature.

Eco-Translation: Translation and Ecology in the Age of the Anthropocene (1st Edition) by Michael Cronin 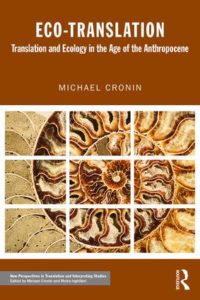 Ecology has become a central question governing the survival and sustainability of human societies, cultures and languages. In this timely study, Michael Cronin investigates how the perspective of the Anthropocene, or the effect of humans on the global environment, has profound implications for the way translation is considered in the past, present and future. Starting with a deep history of translation and ranging from food ecology to inter-species translation and green translation technology, this thought-provoking book offers a challenging and ultimately hopeful perspective on how translation can play a vital role in the future survival of the planet.