Functions of Discourse Markers in English and Chinese Fictional Discourses: A Corpus-based Study 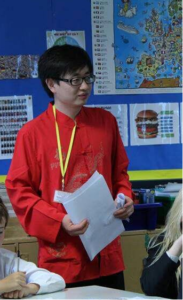 Short-lived but special and sparkling, Chinese avant-garde fiction is viewed by many literary critics as one of the most important parts of contemporary Chinese literature from both home and abroad. So far in some Anglophone countries, avant-garde fiction, in which Yu Hua is always considered as one of the central figures, has become an important part in sinologists’ studies of Chinese contemporary literature, and a way for them to look into the contemporary Chinese society and culture. Also, Yu Hua’s avant-garde fiction is widely translated into other languages, especially into English.
Drawing on Critical Discourse Analysis and a Corpus-based methodology, this research examines China’s image in Yu Hua’s avant-garde fiction and their English translations from three aspects, namely, Chinese characters’ image, Chinese political image and Chinese cultural image. It also identifies any shifts in these images in the English translations and discusses what prompted these shifts. It is hoped that the result of this research will benefit the study of “Chinese cultural going global”.
Spread the love