[CFP] Towards equality, diversity and sustainability in streaming: Korean media in the UK and British media in Korea 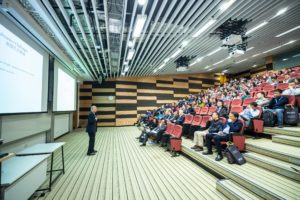 Streaming video usage has expanded more than ever before since the Covid-19 pandemic. The growing use of Over-The-Top (OTT) platforms and Video-on-Demand (VOD) services has led to more media content such as TV programs and documentary as well as films being available to wider audiences. The strong presence of international media on streaming services highlights the importance of translation for the success of selling media content to new audiences.

A range of British media content is available on Netflix Korea, including Netflix originals such as Criminal UK and Bridgerton, and BBC drama series, such as The Last Kingdom, and documentaries, such as Secrets of Great British Castles and Life in Colour, as well as on other Korean based providers such as Wavve and Watcha. In the UK, there is a range of South Korean films on Netflix, such as The Handmaiden directed by Park Chan-wook and Okja directed by Bong Joon-Ho, dramas like Vincenzo, and Netflix originals such as Squid Game. Other providers such as Amazon Prime and Viki offer more subtitled Korean media content.

There is a growing body of work on the effect of Netflix and streaming more generally on media (e.g. Lobato 2019) and in relation to translation (Dwyer 2017), but little work has explored the role of translation or the effects of fandom in promoting British media contents in South Korea and vice versa, despite the pivotal role of translation in promoting media content on streaming platforms. This conference will contribute to the discussion through exploring patterns of distribution and reception in relation to translation and fandom in Korea and the UK, and will ultimately help develop understanding of how streaming services can promote cultural exchange and lead to more sustainable creative practices.

We invite researchers working in translation studies, fandom studies, creative industries, sustainable media, screen studies, Korean studies, and related fields to present papers relating to the topics of the conference, which include (but are not limited to):

This conference is supported by the Fund for International Collaboration and the ESRC. There will be no cost for registration. The language of the conference will be English.

[Call For Papers] Towards equality, diversity and sustainability in streaming: Korean media in the UK and British media in Korea