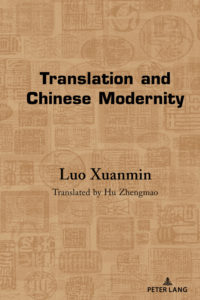 Translation is more than a linguistic act or an act of art; it is also an ethical and social one, which is purpose-driven and heavily influenced by ideology. Historians and scholars of cultural studies confirm this ideological role, although they only acknowledge it when they feel compelled to do so (Chen & Zhang 2000, p. 117). The function of translation is particularly important during cultural transformations of a nation; its role should not be replaced by those of other academic disciplines. Translation is, in short, inextricably intertwined with the modernity of a country and the rejuvenation of a nation.

modernity as a structural concept dealing with the transformation of whole societies, ideologies, social structures and culture. Modernity confirms the promise of scientific reason to unmask irrational forces and point the way to necessary social change. Modernity thus implies historical awareness, a consciousness of historical continuity and the ways the past continues to live in the present. (Swingewood 1998, p. 140)

This also serves as a particularly apt comment on the translation practices in modern China. From the late 19th through the early 20th centuries, a number of outstanding intellectuals such as Yan Fu (Yen Fu, 1854–1921), Lin Shu (Lin Qinnan, ←ix | x→1852–1924), Liang Qichao (Liang Chi-chao, 1873–1929) and Lu Xun (Lu Hsun, Zhou Shuren, 1881–1936) took as their mission in life the reform of misgovernment and the replacement of outdated institutions. In particular, they employed the powerful weapon of translation in an attempt to transform the Chinese society and culture of the time. According to Aying (A Ying, Qian Xingcun, 1900–1977), a Chinese critic and historian of modern Chinese literature, there were more translated works than originally created ones among all the publications during the late Qing Dynasty and the early years of the Republic of China (1980, p. 180). Translators enjoyed higher status than authors, and those translation activities directly contributed to the ensuing New Culture Movement, China’s intellectual revolution critiquing traditional Chinese culture and advocating Western ideals, in the mid-1910s and 1920s.

In the late 19th and early 20th centuries when they clearly realized that lagging behind would invite being bullied but also galvanize them into making determined efforts to strengthen the country, the attitude toward the role of translation turned out to be definitely different, even to the extent of fundamental subversion of the practice in an attempt to search for the opportunities for the development of Chinese culture. This new attitude toward translation was suffused with a great sense of urgency and enlightenment. (Yang 1988, p. 69)

Lu Xun was a typical example. When studying in Japan, he had hoped to help his fellow countrymen through medical science but, when later realizing that their deep malady lay not in the body but in the soul, he switched from the study of medicine to literature. During his literary career, translation and writing went in tandem, with the former even playing a leading role. So Lu Xun’s translation constituted an act of cultural transformation, the purpose of which was to introduce Western culture in order to transform Chinese literature and, in turn, transform Chinese society and its unenlightened national character. To him, to change Chinese literature must start with language reform, which then must start with translation. His idea of yingyi (roughly meaning ‘rigid literal translation’) became a violent means of language reform, challenging the dominant status of wenyan (or the classical Chinese language) at that time.

To this day, there are still many articles, to be sure, which are critical of Lu Xun’s unsmooth yingyi translation. Historically speaking, it is clear that free translation prevailed at his time. Many of those free translation practitioners were diehard traditionalists, asserting that Chinese culture was far superior to that of the West and therefore Western literature was translated in such a way that everything ←x | xi→should be adapted to the Chinese perspective, linguistic or otherwise. As a result, misreading and misunderstanding were frequently seen in free translation at the time. It is easy to imagine what good it could have done to China’s progress and national rejuvenation. It was exactly against this background that Lu Xun insisted on literal or even yingyi translation. Only with such an open mind in the process of translation, as his argument went, could Western culture be truly introduced to China.

Yingyi would bring in both the good and the bad. As time went by, however, the good would naturally be assimilated into Chinese culture, while the undesirable would necessarily be eliminated (Lu 1997, p. 211). Now, nearly a century on, his idea on translation still enjoys its strong relevance. The philosophy behind yingyi which he advocated is still held in esteem today by postmodern postcolonial scholars in the West, so its universal value is self-evident (Venuti 1998).

The early translation activities in Chinese universities were also closely linked to Chinese modernity (Luo 2009, pp. 245–256). Take the “great four masters” of traditional Chinese culture at Tsinghua University then for example. Liang Qichao called for the translation of political fiction, the purpose of which was to bring in his “new citizenship”, “new learning” and “new governance”. Wang Guowei (Wang Kuo-wei, 1877–1927), translated Western philosophical works in the hope of metaphysically enriching the Chinese academic landscape and carrying Chinese culture forward from an epistemological perspective, as can be seen from his articles commenting, from a philosophical angle, on the English translation by Gu Hongming (Ku Hung-ming, 1857–1928), a well-known Chinese scholar in both Chinese and western civilization, of the classic Doctrine of the Mean (Zhongyong). Chen Yinke (Tschen Yin-koh, Chen Yinque, 1890–1969), another of the great four, an influential Chinese historian, employed translation to collect the evidence and corroborate the cultural exchanges between China and the outside world. His approach to the verification of history through translation created a new academic paradigm. At the time, the Chinese translation of Alice’s Adventures in Wonderland by Zhao Yuanren (Chao Yuen-Ren, 1892–1982), one of the founding figures in modern Chinese linguistics and another of the four, was intended not merely to introduce a Western literary work to his fellow countrymen but, through it, to create a refreshing and lively version of spoken Chinese. More importantly, he hoped to introduce children’s literature to China, which was appallingly lacking at the time. Later scholars or alumni from Tsinghua such as Hong Shen, Wen Yiduo, Li Jianwu, and Cao Yu also committed themselves to translation, adaptation, and writing so as to transform the society and shape China’s modernity by means of the theatrical stage.←xi | xii→

Chinese modernity was also reflected in the Tsing Hua Weekly, which was published by the University. During the 20 years from 1916 to 1936, the Tsing Hua Weekly published 439 translated articles, of which 187 were on social sciences, 67 on natural sciences, and 185 on arts and humanities. Noteworthy examples include “The Wild Flower’s Song” (1922), “The Development of Capitalism and the Schools of Economics” (1929), “A Overview of Contemporary Scandinavian Literature” (1933), “Some Aspects of the Danubian Problem” (1934), “On Cultural Heritage” (1936), and “Theory and Organization of Soviet Science” (1936). These translations played an invaluable role in shaping China’s intellectual thought, setting up a system of academic disciplines in tertiary education, disseminating academic ideas, and introducing Western research methodology.

Today, with the integration of the global economy, there is no soil for the existence of unilateralism. Both East and West are facing cultural transformation and adjustment, which means another new development opportunity for translation because cultural construction and cultural identity are, of necessity, closely linked to translation. In the translation of philosophical works, for example, incorrect renderings of the terminology may mislead people ideologically, or even worse, cause the distortion of cultural identity. This explains why many Western scholars—such as Jacques Derrida, Paul de Man, Hillis Miller, Gayatri Spivak, Homi Bhabha, Susan Bassnet, and Lawrence Venuti—have explored the issues of cultural reconstruction and translation from an interdisciplinary perspective. Although Western-centrism has already been questioned by most scholars, including those of the West, the voice of their Chinese counterparts is relatively weak in the reconstruction of world culture and world literature. They should therefore stand firm on their own academic traditions and consciously strengthen the efforts in translating the great works of Chinese culture and in developing its translation theories on the basis of a fine appreciation of the culture and academic thoughts of the West. This will be a critical move to enhance a country’s soft power and an urgent mission of strategic importance as well.