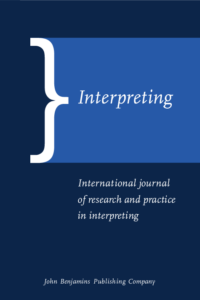 This study investigates empirically the way in which interpreter ideology is manifested in the evaluative language of the World Economic Forum’s Annual Meeting in China in 2016 (English–Chinese language pair). Methodologically, van Dijk’s Ideological Square and Martin and White’s Appraisal framework have been operationalised for the analysis of positive or negative evaluative language in ‘us’ vs ‘them’ discourses. The results reveal an overall positive-‘us’ and negative-‘them’ pattern in the interpreter’s ideological positioning. This is manifested in three ways: (i) negative, pejorative, and sensitive discourses about China are self-censored; (ii) positivity is accentuated and negativity is neutralised in China-related discourses, and (iii) negative tones in the discourses of other countries are amplified. The speaker discourse is ‘edited’ when interpreter ideology is at work during the simultaneous interpreting process. However, the linguistic patterns can provide only partial indications of the possible relationship between interpreter ideology and cognitive operations.