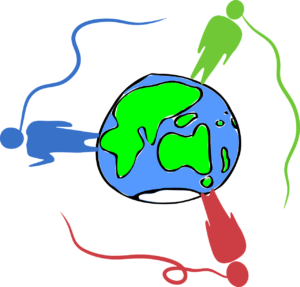 Over the past 500 years, English has gone from a marginal language hardly spoken by anyone outside of England to a global lingua franca with speakers, native and non-native, all over the world. This has created situations of multilingualism both within countries where English is the main language and elsewhere, as many people who speak English on a regular basis are not native speakers, and the language itself has come into contact with other languages in the course of processes of colonisation, immigration, and globalisation. Beginning in the sixteenth century, these processes have broadened the contact zone of English, redefined its relations with the classical languages of humanist communication as well as with modern European languages (some of which have developed varieties outside Europe), and ultimately led to a questioning of the majority/minority-language binary. Literature and the verbal arts, be it to give a realistic description of the world or to experiment with language and form, have reflected, registered and contributed to such plurilingual practices.

To give only a few examples, early modern playwrights such as Shakespeare and Dryden included words or pieces of dialogue in fashionable foreign languages (mostly Italian and French) in their plays, as did Sterne in Tristram Shandy with long passages in French and in Latin; George Eliot’s choice of headings for the chapters in Middlemarch testifies to her plurilingual reading skills; the translation practices of émigré writers such as Nabokov or Beckett rely on their plurilingual experiences, as do Nancy Huston’s choices of self-translation between English and French. Authors from multilingual backgrounds writing in English such as (to name but a few) Derek Walcott, Chimamanda Ngozi Adichie and Salman Rushdie resort to forms of language mixing and switching. Multilingualism takes on new inflections for contemporary British poets such as Steve Ely, whose concept of xenoglossia incorporates foreign words, Old English and dialecticisms.

Evolutions in the status of English as a communication language in everyday lives and in artistic productions go hand in hand with evolutions in translation techniques and strategies, with the development of translation into English as a necessary means of worldwide communication as well as the acknowledgment of varied linguistic and cultural skills in target audiences. This is particularly striking in translations (dubbing or subtitling) of contemporary films and TV series which foreground multilingual (and multicultural) environments, such as Jane the Virgin, Unorthodox, Generations, and Derry Girls. Some film genres or series depict plurilingual characters, for example the protagonists in many Bollywood films, or Italian-American gangsters in The Godfather movies or Latino-American gangsters in Breaking Bad;  one could also think of westerns which stage multilingual encounters with Spanish-, French-speaking, or Native American characters.

For contemporary artists such as Caroline Bergvall, whose installation and collected poems Meddle English bring together English, French and Middle English, multilingualism fuels a reflection on multimodality. Theatre (The Forbidden Zone by Katie Mitchell, Tous des Oiseaux by Wajdi Mouawad) also uses multilingualism as a way to experiment with contemporary modes of representation on stage.

More generally, traditional social constructs applied to analyse language use and cultural productions in translating, such as the “foreign/native” or the “source/target” opposition, are in need of redefinition. Likewise, the concept of lexical borrowing needs to be reexamined if English is considered a multilingual language from the start, with its elaboration relying on words and structures taken from Saxon, but also Latin and Romance languages – as the lexicographers (and the translators) from the Renaissance already knew.

This two-part conference welcomes both synchronic and diachronic approaches to the interplay between multilingualism and translation involving English as source or target language and at least one other language in works of literature, the performing arts and audio-visual productions, from the sixteenth century to the present. Multilingualism will be taken in the broad meaning of the co-presence of several languages within the same work, thus including neighbouring concepts such as heterolingualism, and such phenomena as code-switching and multi-ethnolects. Papers that combine methodologies from linguistics, literary/film studies and translation studies will be particularly appreciated.

Possible topics include, but are not limited to, the study of:

The first part will take place at Université Paris Nanterre (30-31 March 2023), and will focus more specifically on literary works in print (and the issues related to translating and publishing multilingual texts) from the sixteenth century to the present. Keynote speaker: Dirk Delabastita (Université de Namur).

The second part will take place at Université de Lille (February/March 2024), and will focus more specifically on the performing arts, films and TV series (and the challenges set to translators by aural effects dependent on multilingualism). Keynote speaker: Charlotte Bosseaux (The University of Edinburgh).

Please send abstracts (300 words) and a short bio-bibliography in English or in French for either conference to Laetitia Sansonetti (l.sansonetti@parisnanterre.fr), Julie Loison-Charles (julie.charles@univ-lille.fr) and Claire Hélie (claire.helie@univ-lille.fr) by June 1, 2022.