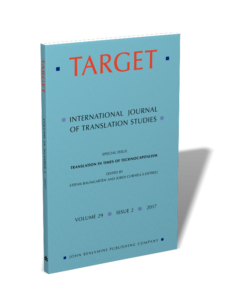 “The (Self)translation of Knowledge: Scholarship in Migration”

Over the last decade, armed conflicts, oppression, and poverty have forced millions of people into flight from their homes. Meanwhile, over the last several decades, the globalized economy has enticed people in various careers to relocate—both eastward and westward—for work. These contemporary migrational dynamics have promoted a focus within Translation Studies on geographic relocation as a driving force behind interlinguistic and -cultural transmission of (translated) texts, of loan words, (translated) concepts, and (appropriated) traditions. The description and analysis of migratory processes qualify as interesting objects for Translation Studies because authors who migrate seldom fully “arrive.” They tend to swing, voluntarily and involuntarily, back and forth between the languages and cultures of their new and old “homes.” This linguistic and cultural pendulum motion of migrational (self)translators poses in turn methodological challenges to the conventional understanding of translation as a teleological move from source to target texts and cultures (cf. Inghilleri’s Translation and Migration (2017) and Polezzi’s special issue of Translation Studies (2012), also titled Translation and Migration).

The figure of the self-translator commands special interest within the migrational turn in Translation Studies, and yet the field has devoted far more attention to literary authors and their strategies than to other self-translating “crosscultural interlocutors” and “culture brokers” (Cordingley 2013, 7). The supposition is that literary self-translators often enjoy unusually wide latitude in their translational choices (Castro, Mainer, and Page 2017) although such freedom is just as readily observable in the work of self-translating academics (Keller and Willer 2020). To break with this traditional privileging of literary forms of discursive participation, this special issue explicitly aims at highlighting the centrality of academic migrants who, on the one hand, influence their host cultures through the work of self-translation within institutional spaces of knowledge production and, on the other hand, are influenced by their new cultural and linguistic work environment. For displaced academics to continue research abroad requires complex acts of selftranslation, not only into a new academic language, but also into a new academic and intellectual culture, and these selftranslations leave neither the host discourses and cultures nor the selftranslating actors themselves unaffected. An intellectual history of academic migration has the challenging task of investigating why certain self-translations achieve influence by accounting for social, linguistic, discursive, disciplinary, and institutional mechanisms of adaptation, integration, and advancement.

The humanities make for especially interesting cases of academic self-translation because terminology and argument construction function more flexibly in discourses in the humanities than in other fields, so that translational traces can be detected in our specialized language and reasoning more frequently and reliably than in more empirical disciplines. It is hardly surprising that it is most often humanists who explicitly problematize the linguistic difficulties inherent in the self translation process (Hannah Arendt remains perhaps the most iconic example). However, extant historical research suggests that language is not always the main hindrance to self-translation into a new academic culture, and the articles in this special issue are expected to help delimit the boundaries of linguistic and non-linguistic factors in academic success in (self)translation, such as one’s social and academic prestige and the suitability of one’s work to academic research trends or to the political climate within local university cultures.
The study of (self)translated humanistic scholarship promises insight into academics’ degree of self-awareness regarding the conditions for the success of their self-translation. Such research could also reveal what academics consider (un)translatable in their lives and work, for whom their work is (not) translatable, and which rhetorical resources they draw on to bridge perceived gaps.
If non-linguistic factors prove decisive, these might include social prestige, academic pedigree (including language and nationality), and the suitability of one’s work to academic research trends and the political climate at the relevant university.
The editors of this special issue of Target have recently led a workshop on the forced adoption of English and American academic culture by (primarily Jewish) scholars and intellectuals fleeing the Third Reich (https://forcedtranslation.uni-mainz.de/). For this special issue we explicitly want to broaden the scope to highlight configurations of interlingual migrant academic, i.e., humanistic production in the geographic contexts of South America, Africa, and Asia—as well as work on the relationship between the wealthy hubs of academic production and the “peripheries” (Canagarajah 2002) or “semi-peripheries” (Bennett 2014) of global academia.

We welcome proposals for conceptual papers as well as case studies and empirical research
contributions that address the following aspects of academic (self)translation (though this is not
intended as an exhaustive list of possible topics).

Globalization and its effects on academic language choice, pressure to migrate, and academic self-translation

Lingua franca as incentive (and/or product) of self-translation practices

Turning points in intellectual history inaugurated by the migration of academics

(Self)translation of scholarship in periods of (de-)colonization between local and colonial
languages in Asian, South American, or African contexts

3. Case studies of the emergence of specific academic self-translations in the context of voluntary
or involuntary migration (with a preference for case studies that expand the geographic scope
beyond Europe.)

The translation, publication, and editorial politics of specific (self)translating scholars

4. Dichotomies and methodological (in)compatibilities that highlight differences between:

Academic migration and other experiences of migration