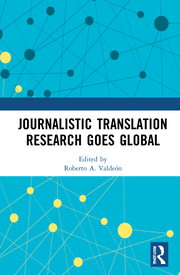 Edited By Roberto A. Valdeón

Drawing on a variety of theoretical concepts and methods, this book addresses the interface between language, politics and translation. The contributors analyse the role, practice and impact of journalistic translation in Canada, China, Arab countries, France, Spain, the Ukraine, Finland and Serbia.

The introductory chapter surveys the evolution of journalistic translation research during the period 2015-2020. The chapters that follow delve into the role of language and translation in news production with a specific focus on the connections with politics and power. The authors analyse Canadian newspapers in French and English during the subprime crises, the representation of Muslims in three European newspapers in the aftermath of Nice terrorist attacks, the translation of Donald Trumps’ tweets in Spain, the role of evaluation in opinion articles in the Ukraine, the use of reported speech in Finnish articles, the translation of Donald Trump’s offensive comments into Arabic and so on. In the discussions, the authors draw on functional grammar, critical discourse analysis, Appraisal theory and pragmatics.

This volume will appeal to all those interested in the ways translation shapes media constructions of news events and showcases the centrality of journalistic translation research as a dynamic subfield within translation studies.

The chapters in this book were originally published as a special issue of the journal Perspectives: Studies in Translation Theory and Practice.