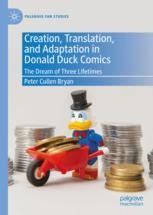 This book examines the scope and nature of Donald Duck and his family’s popularity in Germany, in contrast to the diminished role they play in America. This is achieved through examination of the respective fan communities, business practices, and universality of the characters. This work locates and understands the aspects of translation and adaptation that inform the spread of culture that have as yet been underexplored in the context of comic books. It represents a large-scale attempt to incorporate adaptation and translation studies into comics studies, through a lens of fan studies (used to examine both the American and German fan communities, as well as the work of Don Rosa). This work builds on the efforts of other scholars, including Janet Wasko and Illaria Meloni, while expanding the historical understanding of what might be the world’s best-selling comics.