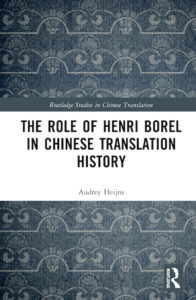 Against the historical background of Chinese translation in the West and the emergence of several prominent European translators of China, this book examines the role of a translator in terms of cross-cultural communication, the image of the foreign culture in the minds of the target audience, and the influence of their translations on the target culture.

With the focus on the career and output of the Dutch translator Henri Borel (1869–1933), this study investigates different aspects of the role of translator. The investigation is carried out by analysing texts and probing the achievements and contributions of the translator, underpinned by documents from the National Archives and the Literature Museum in the Hague, the Netherlands. Based on the findings derived from this study, advice is offered to those now involved in the promotion and translation of Chinese culture and literature. It will make an important contribution to the burgeoning history of Chinese translation.

This book will be of interest to anyone with an interest or background in the translation history of China, the history of sinology in the West, and the role of translators.