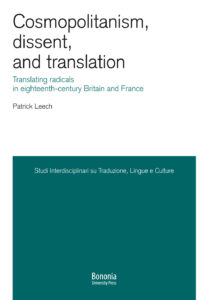 di Patrick Leech
In the eighteenth century, Britain and France experienced a veritable explosion of radical ideas and texts. The production of these ideas and texts took place in increasingly cosmopolitan frameworks, both European and later Atlantic, and translation played a paramount role in their exchange and dissemination. This volume argues that a cosmopolitan approach was a central concern of many dissenting radicals in this period, and looks at the ways in which translation practices in both France and Britain responded to their commitment to it. It examines, in particular, the translation activities undertaken by some of the major protagonists of the spread of radical ideas: Huguenot exiles such as Jean Le Clerc and Pierre Coste, enlightenment figures such as Baron d’Holbach, Abbé Morellet, and Johann and Georg Forster, and revolutionaries and reformists such as Count Mirabeau, Joel Barlow, Jean-Paul Marat, and Daniel Eaton.
Patrick Leech teaches English language and culture at the Department of Interpreting and Translation of the University of Bologna, Forlì Campus. He is currently carrying out research into the history of translation in the eighteenth century.
https://buponline.com/prodotto/cosmopolitanism-dissent-and-translation/
Spread the love