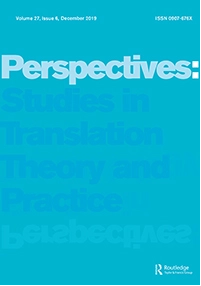 The concatenation effect hypothesis in complex indirect translations: translating the Arabian Nights into Gaelic and Japanese

ABSTRACT
The concatenation effect hypothesis predicts that indirect translations (translations of translations) tend towards a so-called imperialist stand, where they omit elements of the text that are identifiable with the source culture, and also describe themselves as something other than translations. The aim of this article is to ask whether the hypothesis stands in situations where indirect translators who, as well as having access to the translation that they are using as their main source, also have access to additional translations of the same text in the same language. It focuses on the chains of translations of the Thousand and One Nights that led from Arabic to French, from French to English, and from English to both Scottish Gaelic and Japanese. The article demonstrates that if successive translators all adopt a defensive stand, where they omit or elide identifiably foreign elements, but still overtly describe themselves as translations, the final effect will not necessarily be imperialist. However, the translations’ stands are likely to become increasingly defensive. This finding demonstrates that the four stands currently used to categorise the concatenation effect give no mechanism to describe these highly variable phenomena, and should be reworked as fuzzy sets.
KEYWORDS: Indirect translation, concatenation effect hypothesis, thousand and one nights, Japanese, Gaelic
https://www.tandfonline.com/doi/abs/10.1080/0907676X.2020.1797131?journalCode=rmps20