[New Publication] Lorca in English: A History of Manipulation through Translation 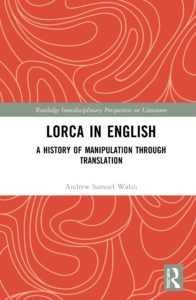 Lorca in English: A History of Manipulation through Translation

Lorca in English examines the evolution of translations of Federico García Lorca into English as a case of rewriting and manipulation through politically and ideologically motivated translation. As new translations of Federico García Lorca continue to appear in the English-speaking world and his literary reputation continues to be rewritten through these successive re-translations, this book explores the reasons for this constant desire to rewrite Lorca since the time of his murder right into the 21st century. From his representation as the quintessential Spanish Republican martyr, to his adoption through translation by the Beat Generation, to his elevation to iconic status within the Queer Studies movement, this volume analyzes the reasons for this evolution and examines the current direction into which this canonical author is heading in the English-speaking world.

Chapter 1. ‘Lorca cannot be Englished’ – some reflections on translation and translatability and canonicity

Chapter 2. Lorca and his intelligent American friends’ – early translations and reception in the pre-Civil War years

Chapter 3. ‘The martyrdom of an entire people’ –Canonization and (self) censorship (in the post-civil war years)

Chapter 4. ‘And you, Garcia Lorca, what were you doing down by the watermelons?’ – The Beat Generation’s adoption of a Spanish ‘Surrealist’

Chapter 5. Everybody says I love Lorca – Democracy and the Transition

Chapter 6. ‘The fairy son of Whitman’ – the creation of a gay icon

Chapter 8. ‘The King of Harlem sings with the crowd’. Lorca and the perils of cultural appropriation in the 21st century

Andrew Samuel Walsh is a lecturer at Comillas Pontifical University Madrid and is the author of three books and numerous articles in the field of Translation Studies and Comparative Literature, including Jaime Gil de Biedma and the Anglo-American Tradition and Literary Retranslation in Context, and several publications on the history of Lorca in English translation.