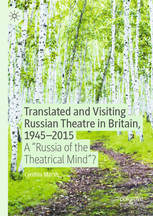 Translated and Visiting Russian Theatre in Britain, 1945–2015: A “Russia of the Theatrical Mind”?

This book tackles questions about the reception and production of translated  and untranslated Russian theatre in post-WW2 Britain: why in British minds is Russia viewed almost as a run-of-the-mill production of a Chekhov play. Is it because Chekhov is so dominant in British theatre culture? What about all those other Russian writers?  Many of them are very different from Chekhov. A key question was formulated, thanks to a review by Susannah Clapp of Turgenev’s A Month in the Country: have the British staged a ‘Russia of the theatrical mind’?