[Online event] The harp in translation: Online concert and discussion 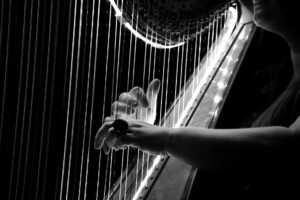 The harp in translation: Online concert and discussion

How do musicians borrow ideas from other musical traditions, or techniques from other instruments – and in what ways does this behave like spoken language?In seventeenth-century Paraguay, instrument makers adapted earlier designs from Spain and Brazil to create a harp capable of expressing the country’s range of folk music. Meanwhile, some of the ornamental phrases used in Scottish harp music originated in bagpipe performance, and are now simply a part of how the harp is played.Music shares many aspects of spoken language, and we often find it useful to use the same terms when talking about the two. For example, jazz has a different vocabulary and grammar from Celtic folk music, with different permissible combinations of notes and harmonies. And musicians constantly move between musical languages, translating ideas and incorporating techniques from many different traditions into their own performances.In this evening of performance and discussion, join harpist Tamsin Dearnley on a journey through Scotland, Japan, the Middle East, Wales and beyond. She’ll explore some of the ways in which she’s translated harp music between different countries, languages and cultures, whether teaching Celtic folk music in a Tokyo music school or adapting Metallica for the lever harp.Tamsin Dearnley is a harpist, composer and sound designer with a focus on bringing the lever harp to a wider audience. She regularly leads workshops on ‘non-standard’ music for the clarsach (such as jazz) to demonstrate that the instrument is still as relevant today as it ever has been. Her composing work is immensely varied, ranging from contemporary harp music to synth-based game soundtracks. She works closely with Teifi Harps and frequently demonstrates for them at festivals.

This free event will be livestreamed on Saturday 30 May at 7pm BST via the link below. Booking is not necessary, but by doing so you will be sent a reminder containing the livestream link.