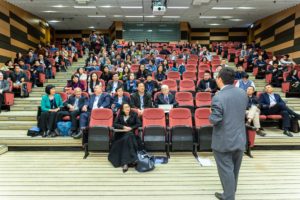 Following in the footsteps of recent conferences (Translation and Minority, University of Ottawa, 2016; Justice and minorized languages under a postmonolingual order, Castelló de la Plana, 2017) and publications (Translation and minority, lesser-used and lesser-translated languages and cultures, JoSTrans, 2015), the aim of this conference is to explore the ways in which translating literature can serve to protect and empower minority, minor and lesser-used languages, both in contexts of multilingualism where the power balance of the languages spoken in the same country is often unequal, and in situations of conflict, where authors and translators face the threat of physical harm, coercion, censorship and/or exile. In this way, “the struggle to sustain languages in danger often equally implies the need to redress longstanding problems of marginalisation, stigmatisation and misrepresentation” (Folaron 2015: 16). Moreover, in a world where ‘minority’ is understood as a struggle against the mainstream and where Anglo-American-led processes of globalization and cultural export are reshaping transnational literary production and circulation, translation flows from minor and minoritized languages are largely uneven.

Since the publication of The Manipulation of Literature (Hermans, 1985), Comparative Literature scholars have been obliged to confront the manipulation involved in any cultural transfer, particularly through translation. Institutions of culture and the state play an important role in determining the ways texts cross tangible and intangible borders. Hermans denounced three types of marginalisation: the status of translation in Literary Studies and Comparative Literature, the peripheral position of translations in literary corpora, and the absolute supremacy of the source text. Underwriting these critiques, we welcome proposals dealing with non-canonized literature, objects of study rejected by dominant circles of culture and literary movements that aimed to destabilise established literary repertoires.

More than three decades after their arrival, we want to (ap)praise the Manipulation school and Polysystem Theory for the vital role they played in the discipline of Translation Studies. Indeed, the Polysystem Theory focused on the target text as a manipulated text that was produced in a specific literary, historical, political and social context. As Snell-Hornby points out: “Translation is seen as a text type in its own right, as an integral part of the target culture and not merely as the reproduction of another text” (1988: 24).

Their legacy was to help abolish epistemological slaveries that biased Otherness and made room for countercultural manifestations. Their heuristic tools enabled the analysis of literature as a complex and dynamic system, stressed the necessary interaction between theory and practice, introduced a descriptive, target-text-oriented approach and laid the groundwork for the study of norms that condition the production and reception of translations within a specific context, the position of translations within the literary system and the interaction between different national literatures.

With the cultural and the current sociological turns in mind, we would like to stress Bassnett and Lefevere’s words “Rewriting can introduce new concepts, new genres, new devices, and the history of translation is the history also of literary innovation, of the shaping power of one culture upon another. But rewriting can also repress innovation, distort and contain, and in an age of everincreasing manipulation of all kinds, the study of the manipulative processes of literature as exemplified by translation can help us toward a greater awareness of the world in which we live” (1993; vii).

In this spirit, we welcome contributions on the following (or related) topics: