[New Publication] The Translator on Stage 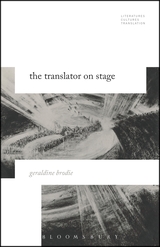 About The Translator on Stage

In today’s theatre, productions of plays that originated in another language are frequently distinguished by two characteristics: the authorship of the English text by a well-known local theatre specialist, and the absence of the term ‘translation’-generally in favour of ‘adaptation’ or ‘version’. The Translator on Stage investigates the creative processes that bring translated plays to the mainstream stage, exploring the commissioning, translation and development procedures that end with a performed play.Through a sample of eight plays that span two thousand years and six languages-including Festen, Don Carlos, Hedda Gabler and The UN Inspector-and that were all staged within a three-month period, Geraldine Brodie brings in a wide range of theatre practitioners to discuss their roles in the translation process and the motivations that govern London theatre translation activities. The Translator on Stage is informed by specially conducted interviews with the productions’ producers, artistic directors, directors, literary managers, playwrights and specialist translators, including Michael Grandage, Rufus Norris, David Eldridge, Juan Mayorga, David Johnston and Mike Poulton. It sheds new light not only on theatrical translation procedures, but also on the place of translation in society today.

List of Figures
List of Tables
Acknowledgements
1. Introduction: The Role of the Translator on the London Stage
2. London Theatre: Contexts of Performance
3. Eight Productions and Their Translation Teams
4. Agents of Translation
5. Conclusion: Translation Theory in the Theatre
Appendix 1: Sample Play Data
Appendix 2: Archives
Bibliography
Index
Reviews
“Geraldine Brodie has written an essential book on the mystery, complexity and glory of translation for the stage. Being a playwright, adaptor/translator, artistic director and director myself, I found it fascinating reading for my own work. However, I recommend this book to anyone who loves international theater and wants to learn the process of bringing masterful plays alive to audiences in a new language. I could not put this book down.” –  Emily Mann, Artistic Director and Resident Playwright, The McCarter Theatre Center, Princeton, New Jersey, USA“If you want to know why translation matters to stage practice, how it shapes an audience’s understanding of a play, and how it relates to the work of directors and actors, there is no better book than Geraldine Brodie’s The Translator on Stage. A study of agency and action, of process and product, and of the different practices that shape how a play text moves from one language to another across different modes of translation, this is an erudite, highly readable examination of the fluid and sometimes contentious relationship between text and adaptation. Drawing on a wide range of comparative examples from Hecuba to Festen, Brodie articulates a vision of translation as a creative, interpretative act with wide implications for understandings of how theatre operates in contemporary society.” –  Maria M. Delgado, Professor and Director of Research at The Royal Central School of Speech and Drama and Honorary Fellow at The Institute of Modern Languages Research, University of London, UK“The Translator on Stage sets out to explore the teams and networks that provide theatre in translation. It is an investigation into the processes of theatre translation ‘in actual occurrence’, based on eight plays in translation in 2005, that provides rare insights into real collaborations that bring the translated play from commission to performance. Geraldine Brodie offers new understanding, both practical and theoretical, of this often hidden work in our theatre.” –  Catherine Boyle, Professor of Latin American Cultural Studies, King’s College London, UK

The Translator on Stage

In today’s theatre, productions of plays that originated in another language are frequently distinguished by two characteristics: the authorship of the English text by a well-known local theatre specialist, and the absence of the term ‘translation’-generally in favour of ‘adaptation’ or ‘version’.