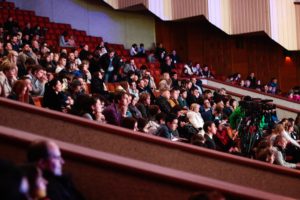 The Taboo Conference series is an interdisciplinary conference aimed at bringing together scholars of various aspects of taboo in a variety of academic fields. The project was originated at the Department of Interpretation and Translation of the University of Bologna, Italy, where the first edition was held in 2012. The following editions were held every two years in Durham (UK) and Barcelona (Spain). For its fourth installment the conference returns to the hills of Romagna in the beautiful medieval village of Bertinoro. We hope you’ll be able to join us this year to discuss all the multifaceted ramifications of taboo and the media.

TABOO AND THE MEDIA

In a world that seems continuously to be pushing the envelope of what is acceptable to the inhabitants of specific linguistic and cultural contexts, this interdisciplinary conference acknowledges the importance of investigating taboos and their reinforcement/breaking in various areas of language, culture and society, and across different cultures. We propose to explore the delicate balance and subtle boundaries between the need for inclusion and respect for different ethnic, religious, sexual, etc. backgrounds – which seems to be at the basis of modern multicultural societies – and a (un)conscious push towards the breaking of existing taboos, for example for shock value, as in the case of comedy and art. In such contexts, investigation of the linguistic, cultural, social, institutional and personal implications of taboo reinforcement/breaking appears of extreme value.

For its 4th edition, The Taboo Conference series will specifically address the intricacies of taboo and/in the media in its various occurrences from the points of view of production, performance, and perception/reception and in the broadest spectrum of print and virtual media. The subject of taboo and/in the media seems to have become especially relevant in the last few years, in which political correctness at both the institutional and individual level has been seen, on the one hand, as a crucial tool in protecting people from verbal abuse and in preventing the reinforcement of stereotypes and, on the other, as a set of measures and a way of thinking which significantly curtail free speech in many aspects of the public sphere.

The 2018 conference seeks to explore the shifting boundaries of the acceptability of taboo in their various incarnations as produced and perceived in today’s media landscape, from cinema and television, to news, videogames, and different kinds of online content. Possible areas of inquiry include, for example, political orientations and political satire, identity and gender politics, ethnic stereotypes, different kinds of non-normative behaviour, political correctness and the discourse surrounding it, and the debate between real and perceived offense through comedy.

We welcome individual proposals or pre-organized panels from different disciplines pertaining – but by no means limited – to the following thematic areas and their intersections in various mediatic forms:

The working language for the conference is English. Each paper presentation should be scheduled for 15 minutes to be followed by a 10-minute Q&A to the panel.

300-word abstracts and a brief bionote should be sent to thetabooconference@gmail.com by 15th April 2018 with the subject “TaCo2018 – proposal”. If you are interested in submitting a pre-organized panel, please contact us by the same deadline.

Notification of acceptance for both abstracts and panels will be given by 15th May 2018.

The 2018 conference seeks to explore the shifting boundaries of the acceptability of taboo in their various incarnations as produced and perceived in today’s media landscape, from cinema and television, to news, videogames, and different kinds of online content.