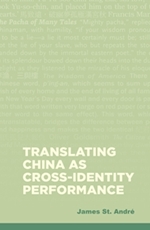 This provocative new book applies the perspective of cross-identity performance to the translation of a wide variety of Chinese texts into English and French from the eighteenth to the twentieth centuries. Drawing on scholarship in cultural studies, queer studies, and anthropology, James St. André argues that many cross-identity performance techniques, including blackface, passing, drag, mimicry, and masquerade, provide new insights into the history of translation practice. He makes a strong case for situating translation in its historical, social, and cultural milieu, reading translated texts alongside a wide variety of other materials that helped shape the image of “John Chinaman.”
A reading of the life and works of George Psalmanazar, whose cross-identity performance as a native of Formosa enlivened early eighteenth-century salons, opens the volume and provides a bridge between the book’s theoretical framework and its examination of Chinese-European interactions. The core of the book consists of a chronological series of cases, each of which illustrates the use of a different type of cross-identity performance to better understand translation practice. St. André provides close readings of early pseudotranslations, including Marana’s Turkish Spy (1691) and Goldsmith’s Citizen of the World (1762), as well as adaptations of Hatchett’s The Chinese Orphan (1741) and Voltaire’s Orphelin de la Chine (1756). Later chapters explore Davis’s translation of Sorrows of Han (1829) and genuine translations of nonfictional material mainly by employees of the East India Company. The focus then shifts to oral/aural aspects of early translation practice in the nineteenth century using the concept of mimicry to examine interactions between Pidgin English and translation in the popular press. Finally, the work of two early modern Chinese translators, Gu Hongming and Lin Yutang, is examined as masquerade.Offering an original and innovative study of genres of writing that are traditionally examined in isolation, St. André’s work provides a fascinating examination of the way three cultures interacted through the shifting encounters of fiction, translation, and nonfiction and in the process helped establish and shape the way Chinese were represented. The book represents a major contribution to translation studies, Chinese cultural studies, postcolonial studies, and gender criticism.