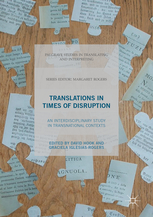 This book throws light on the relevance and role played by translations and translators at times of serious discontinuity throughout history. Topics explored by scholars from different continents and disciplines include war, the disintegration of transnational polities, health disasters and revolutions – be they political, social, cultural and/or technological. Surprisingly little is known, for example, about the role that translated constitutions had in instigating and in shaping political crises at both a local and global level, and how these events had an effect on translations themselves. Similarly, the role that translations played as instruments for either building or undermining empires, and the extent to which interpreters could ease or hamper negotiations and foster new national identities has not been adequately acknowledged. This book addresses all these issues, among others, through twelve studies focused not just on texts but also on instances of verbal and non-verbal communications in a range of languages from around the world. This interdisciplinary work will engage scholars working in fields such as Translation Studies, History, Modern Languages, English, Law, Politics and Social Studies.