[New publication] An Anthology of Chinese Discourse on Translation (Volume 2) 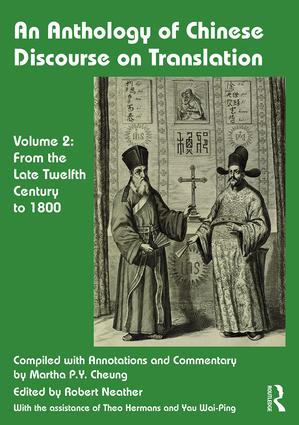 An Anthology of Chinese Discourse on Translation (Volume 2)

From the Late Twelfth Century to 1800

Translation has a long history in China. Down the centuries translators, interpreters, Buddhist monks, Jesuit priests, Protestant missionaries, writers, historians, linguists, and even ministers and emperors have all written about translation, and from an amazing array of perspectives.

This second volume of the seminal two-volume anthology spans the 13th century CE to the very beginning of the nineteenth century with an entry dated circa 1800. It deals mainly with the transmission of Western learning to China – a translation venture that changed the epistemological horizon and even the mindset of Chinese people. Also included are texts that address translation between Chinese and the languages of China’s Central Asian neighbours, such as Manchu, which was to become of crucial importance in the Qing Dynasty.

Comprising 28 passages, most of which are translated into English for the first time here, the anthology is the first major source book of its kind to appear in English. It features valuable primary material, and is essential reading for postgraduate students and researchers working in the areas of Translation, Translation Studies and Asian Studies.