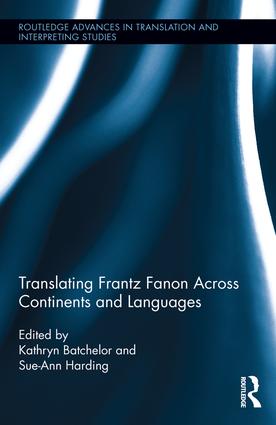 This book provides an innovative look at the reception of Frantz Fanon’s texts, investigating how, when, where and why these—especially his seminal Les Damnés de la Terre (1961) —were first translated and read. Building on renewed interest in the author’s works in both postcolonial studies and revolutionary movements in recent years, as well as travelling theory, micro-history and histoire croisée interests in Translation Studies, the volume tells the stories of translations of Fanon’s texts into twelve different languages – Arabic, Danish, English, German, Italian, Norwegian, Persian, Polish, Russian, Serbo-Croatian, Swahili and Swedish – bringing both a historical and multilingual perspective to the ways in which Fanon is cited today. With contributions from an international, interdisciplinary group of scholars, the stories told combine themes of movement and place, personal networks and agency, politics and activism, archival research and textual analysis, creating a book that is a fresh and comprehensive volume on the translated works of Frantz Fanon and essential reading for scholars in translation studies, postcolonial studies, cultural studies, critical race studies, and African and African diaspora literature.

3. Fanon in the East African Experience: Between English and Swahili Translations

4. Fanon in Arabic: Tracks and Traces

5. Voice and Visibility: Fanon in the Persian Context

6. Fanon in the ‘Second World’: Yugoslavia, Poland and the Soviet Union

8. Fanon in Scandinavia: Words and Actions