There are six different campuses of SJTU, and Researching Translation and Interpreting I will be held at the Minhang Campus: 800 Dongchuan Road, Shanghai, Postcode: 200240

The conference venue is located in the School of Foreign Languages (Yang Yongman Building), Shanghai Jiao Tong University, which enjoys a beautiful campus along with an active, intellectual and intimate campus atmosphere. The Conference Hall, on the third floor of the building, will be the main conference room for the event, and can accommodate over one hundred people. 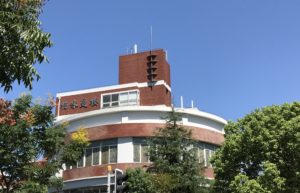 How to get to the conference venue (Yang Yongman Building)

After entering the campus from Siyuan Gate (800 Dongchuan Road), please turn right and go eastward along the South Nanyang Road. Yang Yongman Building is at the crossing of South Nanyang Road and Yuanpei Road. Look for a round building with red and white walls.

There are excellent taxi services from both airports to SJTU. You’ll find taxis at the taxi rank outside the main terminal buildings (follow the signs within the airport). Ask for ‘Shanghai Jiao Tong Daxue, Dongchuanlu’, or show the driver the following address in Chinese: 上海交通大学，上海市东川路 800号. It will take about 35 minutes from Hongqiao Airport by taxi (about 90RMB) and 50 minutes from Pudong Airport (about 180RMB).

From Hongqiao Airport to SJTU by Metro
You may take Metro Line 10 (heading toward Xinjiangwancheng), and then interchange to either Line 4 (loop line heading toward Yishan Road) or Line 3 (heading toward Shanghai South Railway Station) both at Hongqiao Road Station. Then you need to take the metro and interchange to Line 1 at Shanghai Indoor Stadium after Line 4 or at Shanghai South Railway Station after Line 3. After getting on Line 1, you may follow the same steps mentioned above in “From Pudong Airport to SJTU by Metro”.

The closest metro station to the campus is Dongchuan Road, where you can take Metro Line 5 (heading toward Xinzhuang). At Xinzhuang (one terminal station of Line 5), you can interchange to Line 1, and then go to wherever you expect to visit in Shanghai.